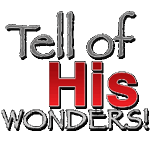 Tell of His Wonders

What a Day that Will Be!

Last Sunday at my sister’s church was “old fashioned day,” and they chose hymns from earlier days. I loved it when they chose one of my favorites from all the way back to my teen years called, “What a Day That Will Be.” This song remains a favorite of mine and I wish it were sung more often! One of the verses says:

There’ll be no sorrow there;
No more burdens to bear!
No more sickness, no pain,
And no more parting over there!
And forever I will be
With the One who died for me!
What a day, glorious day that will be!

As you may be guessing, I’m getting ready to say goodbye to my family and head back to Togo. I’m so thankful for the privilege to work there; I’m glad to go back, but my heart aches as we part. I am so, so grateful that when I said “yes” to the Lord as a missionary, my family said “yes” along with me. They allow me to go with their blessing and they ache as much as I do when I head back.  My departure is set for Tuesday, July 24.

It’s been an amazing 11 weeks! Our family is so thankful for all the Lord has done to help with the move to Tennessee! Mom & Dad are settling into their house, getting established with doctors, etc. Our main prayer requests are that they adjust well, and that their house in Maine will sell before the cold weather arrives. The Lord is able! There are still many details to take care of, and we pray for Dad’s health and Mom’s strength and stamina. My sister and her husband live only 15 minutes away, and we are grateful. My sis is a nurse and is a huge help on multiple levels. I remain willing to come back to the States and help any time I am needed, and we are confident the Lord will make the way clear.

Thank you so much for praying during this time! How comforting to know that as a family in the Lord, we can pray for one another and He hears and answers! And how comforting to remember that one day, there will be no more goodbyes, sickness or aging, but instead, sweet fellowship with each other, and especially with our Savior who gave Himself for us!

The Lord often shows His nearness to me as I enjoy His creations in nature. He allowed our family the wonderful treat of having bluebirds nesting in the yard of my parents’ new home in Harrison, TN. It is sweet to witness how He has created the birds to feed and care for their young. Birds always remind me of His loving attention to His children. He feeds the birds; He cares for us more! (See Matthew 6:26).